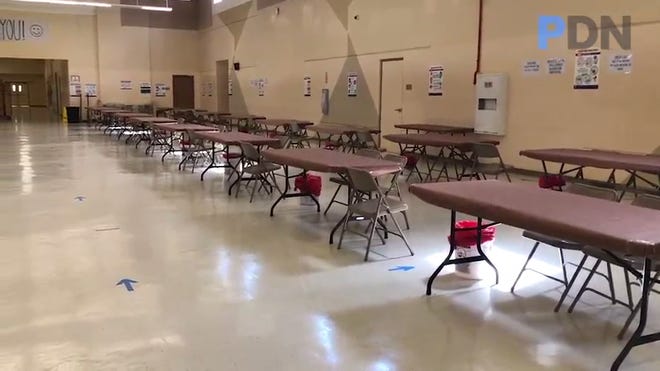 Vaccinations for health care workers will continue Tuesday, and the Department of Public Health and Social Services is trying to coordinate vaccines for residents at St. Dominic’s Senior Care Home, according to spokeswoman Janela Carrera.

Meanwhile, manufacturer Pfizer-BioNTech confirmed the viability of a package that arrived over the weekend with a problem involving its thermal sensor. The shipment has been cleared for use, according to an announcement from the Joint Information Center.

Some 1,394 health care workers have been vaccinated since the first shipment of the Pfizer vaccine arrived in Guam last week. A total of 11,700 doses, which will fully immunize 5,850 individuals, have been received on Guam.

Carrera said Tuesday’s clinic will be at Okkodo from 9 a.m. to 3 p.m. and is only open to health care workers.

More:Here’s what people told the Cannabis Control Board about recreational pot

No other vaccine clinics are scheduled this week, Carrera said.

Health care workers and residents of long-term care facilities are part of the first priority groups who will receive the vaccine.

Public Health is also ready to move to the next phase of vaccinations for critical service workers, Carrera said.

The government’s 24-member Vaccine and Antiviral Prioritization Policy Committee was scheduled to meet Monday evening to discuss the vaccine plan. The group is supposed to help identify priority groups based on federal recommendations.

The committee also is responsible for developing a communication plan to explain why some groups are targeted for vaccine treatment. But no plan has been announced yet.

Carrera said a lot has happened since the committee last met, including the FDA approval of the Moderna vaccine, Guam receiving all of its December vaccine allocations, and the start of phase 1a vaccination.

Committee members will continue discussions on COVID-19 vaccine-related matters as well as the anticipated rollout for Phase 1b vaccine distribution.

Who is next for vaccine
People 65 and older and those with “comorbidities” — phase “1c” — would be the next priority, but the government hasn’t stated which high-risk medical conditions would qualify, the priority within that group, or how it intends to start vaccinating those people.

More than 16,000 people on Guam are 65 or older, according to estimates by the World Bank. About 12% of all adults on Guam have diabetes, which is considered a comorbidity for COVID-19.

Phase “1a” includes health care personnel who have direct or indirect exposure to COVID-19 or infectious material and residents of long-term care facilities.

Guam has about 2,100 residents employed in the health care industry, according to a 2019 Guam Department of Labor report, in all fields of medicine, including physicians, nurses, dentists, pharmacists and others.

Few Guam residents are in long-term care facilities, possibly 60 or so, according to Public Health.

Phase “1b” includes “essential service workers” who have a “key role” in ensuring essential functions are running, but who have difficulty maintaining social distancing while on duty.
Phase “1c” includes those 65 and older and those diagnosed with high-risk medical conditions or who are predisposed to severe illness.
Phase “2” includes those who were eligible for the first phase but who weren’t vaccinated because of limited supply or because they allowed others to go first. It also includes essential workers, “underserved populations” and the general population.
Phase “3” is a continuation of Phase 2, with more opportunities for the general public to be vaccinated.
Shipment cleared for use
The thermal sensor problem was reported in a shipment that arrived Saturday, according to JIC. The shipment contained two boxes with 3,900 doses each of the vaccine, for a total of 7,800 doses.

“While both packages were being inspected and recharged with dry ice, it was discovered that the GPS-enabled thermal sensor in one package did not have the proper ‘green’ color to signal that the package was in acceptable condition,” a JIC announcement stated. “Although the green light on the GPS-enabled thermal sensor indicates the package maintained sufficient temperatures throughout its delivery to Guam, the absence of the green light does not necessarily indicate that acceptable temperatures were not maintained.”

The Department of Public Health and Social Services has contacted the federal government to report the status and has also contacted the manufacturer for further guidance.

On Monday, Public Health learned that the shipment was cleared for use. The manufacturer retrieved and reviewed data from the sensor and confirmed the viability of the vaccine.