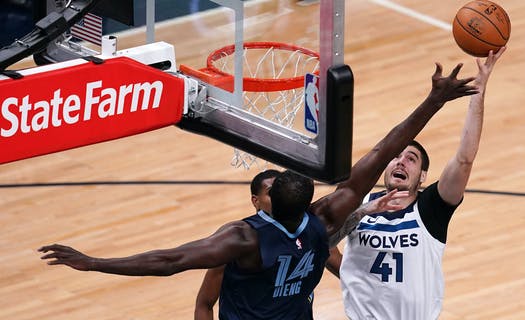 When the Timberwolves had individual voluntary workouts in September, Juancho Hernangomez wasn’t there.

He had another commitment he couldn’t quite cancel. Hernangomez was in Philadelphia snagging a role in Adam Sandler’s latest movie “Hustle.”

The plot revolves around a basketball scout searching for talent overseas, and Hernangomez, hailing from Spain, fit the casting description of a talented overseas basketball player.

“He didn’t realize when he signed up for the movie that we were going to have the bubble,” President Gersson Rosas said of those individual workouts. So while his teammates were in Minnesota going through their paces, Hernangomez was trying to sneak in as much work as he could before filming every day.

“Adam is a great guy. He’s so funny,” Hernangomez said. “We had fun in Philadelphia. … Thanks to Minnesota for letting me do that. It was a great experience. It was a great opportunity for me.”

A few months after Hernangomez finished filming the movie, he inked another deal, this time the basketball kind with the Wolves for up to three years and $21 million if the third-year team option is picked up.

Hernangomez came to the Wolves from the Nuggets along with Malik Beasley in the megatrade that remade the roster in February. He’s entering his fifth NBA season and like Beasley, the Wolves are betting Hernangomez has unfulfilled potential.

When the Wolves gave him significant minutes last season, he averaged 12.9 points per game and shot an impressive 42% from three-point range on 4.9 attempts per game. His numbers in Denver didn’t approach that volume or efficiency.

“Basketball is about rhythm. Playing smart, playing with consistency …” Hernangomez said. “Coach [Ryan Saunders] is great in giving you freedom. But you’ve got to be smart to take great shots and take the shots that we want and get to our spots.”

Those spots tend to be beyond the three-point line or at the rim.

One of the questions on the roster headed into opening day is who will play the power forward spot for the Wolves. Will Saunders opt to go smaller with three wings at times? If he opts for more size at the four, the 6-9 Hernangomez figures to see a lot of time.

Hernangomez had a defensive rating of 118.9 when he was on the floor with the Wolves a season ago. If there’s a way to starter-level minutes, it starts with improving that number.

But right now, if preseason lineups are any indication of what will happen when the Wolves open the season Wednesday, Jake Layman, who is making about $3 million less per year than Hernangomez, has the inside track at the starting job.

Layman has shown the ability to play well with Karl-Anthony Towns thanks to the mobile 6-8 Layman’s cutting ability. Hernangomez didn’t have much time to play with Towns — only two games — before a wrist injury sidelined Towns and coronavirus ended the Wolves’ season in March.

“You were able to see we went with a number of different combinations with Karl in Dallas,” Saunders said of Thursday’s final preseason game. “That’s something we worked through. … I think you can throw different looks out there. No two guys are the same.”

Veteran Ed Davis may also get time if Saunders wants to go with a more defensive-oriented lineup.

Hernangomez and Beasley were close during their time in Denver, but Hernangomez also had a prior relationship with another teammate before coming to Minnesota: Ricky Rubio. The two know each other from their involvement with the Spanish national team, which took gold at the 2019 World Cup.

Hernangomez is included in that group.