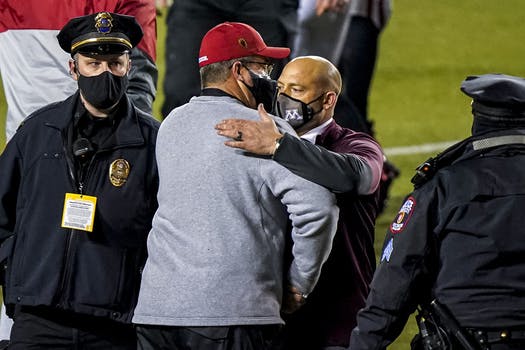 Bowl games were once a coveted postseason honor, with teams clamoring to finish with at least six wins just to make the Idaho Potato Bowl or the Duke’s Mayo Bowl.

But that was before 2020. After a year that has tested teams’ depth, tried their patience and tensed their nerves, many college football teams have called it quits early. Including the Gophers.

The Gophers announced Sunday morning they would not seek nor accept a bowl invite after dropping 20-17 in overtime at Wisconsin on Saturday, ending the regular season at 3-4. With 4-5 Penn State having opted out Saturday night, the Gophers could have made a low-tier bowl even with their losing record since the NCAA did not set bowl eligibility requirements for this pandemic year.

Gophers coach P.J. Fleck hinted his team would sit out after Saturday’s game, painting a picture of a bleak Christmas morning for his players should the team choose to attend a bowl game. With the state of Minnesota largely shut down for any recreational fun, players would basically be away from their families, eating boxed meals alone in their apartments with only a couple hours of in-person football practice and some virtual meetings as distraction.

In a statement Sunday, Fleck said his team will use this much-needed break to re-energize before reconvening on campus in mid-January.

“They invested a tremendous amount of physical and mental energy into competing in the Big Ten season this year and proudly represented Minnesota,” Fleck said in a statement. “The season was filled with daily off-field adversity caused by the pandemic, but their desire to play never wavered, and they sacrificed so much in their personal lives to be able to compete in the Maroon and Gold this year. Right now, our focus is strictly on their well-being off the field, and we look forward to them being able to responsibly spend some of the remaining holiday season with family and loved ones.”

Read Also :   Inside This Day with Scott Richards: Pearl Harbor

In all, 22 teams have decided to forgo the postseason. There have also been 13 canceled bowl games, including the Gophers’ potential landing spot of this coming Saturday’s Guaranteed Rate Bowl because of so many Big Ten opt-outs. The Gophers, Penn State, Michigan State, Maryland and Nebraska are the Big Ten teams to sideline themselves. Ohio State, Indiana, Northwestern, Wisconsin and Iowa will play in bowl games.

Even the teams that did decide to play will have a very different experience. When the Gophers went to the Outback Bowl on New Year’s Day in Tampa this past year, a week of fun activities led up to the actual event. The players swam in the Gulf of Mexico, met a cheetah at Busch Gardens and appeared on the ice between periods at a Tampa Bay Lightning game. Fans traveled south to enjoy the warm weather, packing the streets of Ybor City for a New Year’s Eve parade and the stands at Raymond James Stadium for kickoff.

This year, bowl games will be like any other away game. While other students go home for winter break, players will remain on campus for practice, flying out the day before the game and coming back soon after the final whistle. Only family members probably will be allowed to attend. Some games, including the Rose Bowl, have to relocate just so that can happen.

While the College Football Playoff field still will draw attention as it determines a national champion, and the New Year’s Six games will remain a tradition, everything beyond that just wasn’t enticing enough for teams to stick out a tough season just a bit longer.

Read Also :   Developers in talks with unions to save $2B Flushing project

Fleck said after the Wisconsin loss he’s excited to put a tough 2020 to bed and look ahead to a promising year.

“I think we’re going to be a really good football team next year,” Fleck said. ” … Hopefully we don’t have COVID-20, whatever it is, but hopefully we get this thing under control safely and can have some type of normalcy come spring.”