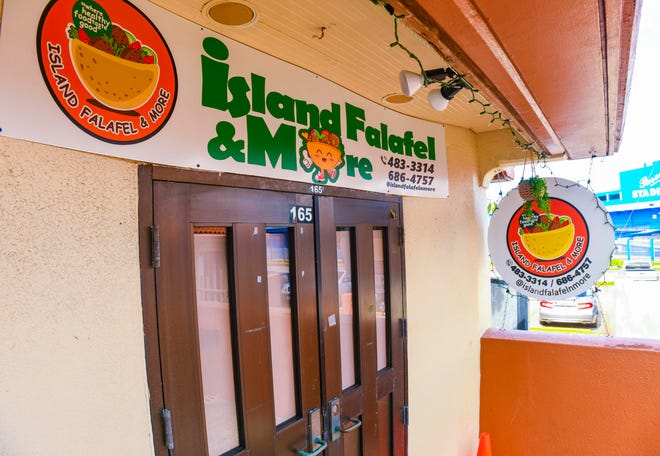 The COVID-19 pandemic has closed many businesses, but it’s opened doors for others.

Island Falafel & More began serving affordable, health-conscious meals out of Chamorro Village Dec. 1, and the team from Primo Pizzakaya plans to open shop for its latest Tumon-based venture, Savage Sandwich Co., by the end of this month.

Both businesses credit the pandemic for allowing them the downtime needed to launch.

Guam-raised Rosabelle Malones was a corporate accounts and banquets manager at Holiday Resort before running her Chamorro Village falafel stall. Like thousands across island, she was quickly out of work when COVID-19 hit and the tourism industry faltered. Within a few weeks of the first islandwide shutdown in spring, she found herself itching for something to do.

The Island Falafel & More food stand, located within the I Sengsong Chamorro, or the Chamorro Village, in Hagåtña on Dec. 17, 2020.
“By the third week, I thought, what am I going to do now?” Malones said.

With her daughter’s encouragement, her 30-some years in Syria and her desire to support local farmers, Malones took a chance on opening a home-style Arab restaurant.

Middle Eastern food
“I’m married to a Syrian-American. … My daughter, Yasmin, she started telling her friends to try mom’s cooking; it’s Middle Eastern food. Her friends kept asking for it,” Malones said. “My daughter said, ‘Why don’t we just open a restaurant and we can share the food with Guam?'”

Malones began by going to the farmer’s market. Supporting the local farmers was important to her, she said, knowing that many were also suffering with the island’s hotels no longer purchasing bulk produce from them.

“The idea is to introduce to local people that we can actually make fantastic, international food, too, based on our local products,” Malones said.

Read Also :   'We lost a family member': Concord police hold candlelight vigil for officer killed in the line of duty

It’s been a success, so far. Opening day was a hit, and the stall has received a steady stream of orders since, from noon to 6:30 p.m. throughout the week. The shop is closed Sundays and Thursdays.

Most of the menu is less than $10, with plenty of options for vegetarians and vegans. Items range from falafel wraps, beef kabob wraps, baba ganoush (roasted eggplant dip), hummus, pita, salads and fatayer, or flatbreads filled with savory or sweet ingredients.

The tabbouleh is one of Malones’ personal favorites. It’s a salad with kale, parsley, tomatoes and bulgar wheat with a bright, zesty dressing.

“I will be introducing more items slowly, using the local products that we have,” she said. “My main purpose is to provide for my family, and at the same time, I’d like to be able to be helpful in the community.”

Malones knows it’s strange to open a new business in such a difficult time, but she said in many ways, her pursuit is crafted for the time.

“It’s takeout, I’m not renting a place with indoor dining. … It’s a healthy item, and I make it very affordable, and there’s not a huge overhead at Chamorro Village,” she said. “I also brought in some of the old hotel staff, to give them a chance. …I look at it like, if the pandemic didn’t happen, this wouldn’t have happened.”

Savage Sandwich Co.
The Savage Sandwich Co., located beside the Onigiri Seven sushi stand, slated to be opening soon within the Park Arcade building in Tumon, on Dec. 17, 2020.
Over in Tumon, Primo Pizzakaya Chef Dylan Saad and consultant Marcy Castro were considering new restaurant ideas for some time. When the pandemic hit, it all fell together.

“Sometime back in March, we were actually wrestling with two different concepts, which one we wanted to do,” Castro said. “The chef’s a firm believer in that the location is one of the most important things, and this location opened up in March. We were just driving by, and it was really noticeable because things were shut down.”

“We took a look at it, and the space kind of just fit one of our concepts perfectly,” she said. “We weren’t sure what was going to happen with COVID, but we took a chance, and we’re grateful for the support that we’ve had so far with our following and regulars, and so we decided to go for it.”

The team popular for their creative pizzas will offer the island craft sandwiches at its new Savage Sandwich Co., located at 1160 Pale San Vitores Road.

It’ll be bright, vibrant and leaning on a 1990s skater, grunge vibe, Castro said. Alvin Almazan will be the lead chef, with Saad overseeing both the new shop and Primo Pizzakaya.

“For us, because things were a little slow for Primo, the hours were limited, in an odd way, it allowed us to have more time to focus on opening this concept,” she said. “We took the time the pandemic gave us, and we funneled that into another project.”

The building’s landlord was especially helpful throughout the process, she said, given the hurdles that the islandwide shutdown imposed. Obtaining permits, licensing and inspections proved to be extremely difficult, as most government of Guam agencies reduced operations.

“Our initial plan was to open in September. The only reason we’re opening in December is the hold up with the permitting. It was so difficult to go each step,” she said. “We just finally got our final inspection this last week. … We are fully permitted and ready to operate.”

JIC reports problem with thermal sensor in second vaccine shipment
4 of 143 test positive for COVID-19
COVID-19 community mass testing resumes Monday
College students reflect on their first semester experiences
An official opening date remains to be announced as the staff finishes up training, but doors will definitely open this month, according to Castro.

Residents can look forward to classics like the Reuben, Cubano, bacon cheeseburger, as well as a “new school” menu featuring global twists like a BBQ-pulled pork banh mi, a vegan channa masala sandwich and more.

Local bakeries are sourced to bake the shop’s sandwich bread. The Belgian-style fries are a highlight, too, Castro said, and will feature a variety of house-made sauces and flavorings. The shop will be takeout only for now, and eventually be an order-counter restaurant.

Like Malones, Castro emphasized embracing the spirit of the times, no matter what form it takes.

“Flexibility is a really big thing, being flexible in your concept. Things are changing, and we don’t know what direction we’re going to go in, the only thing that we know is that we’re still going to be here. So we have to adapt: How are we going to be here?” she said. “We’re going to adapt to whatever we need to do to get things done.”