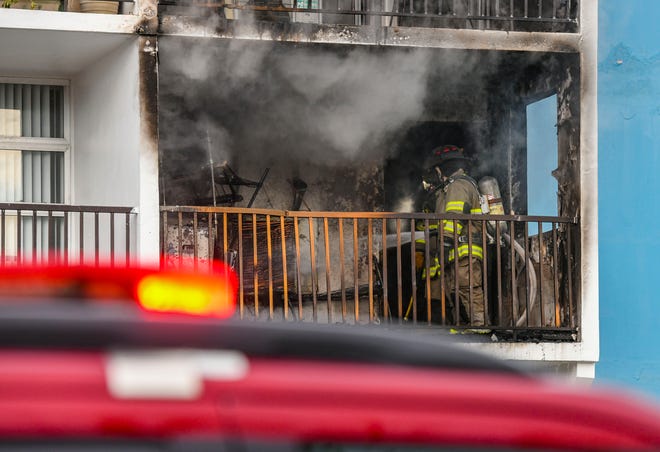 Guam Fire Department firefighters on Wednesday rushed to a Tumon complex to put out a fire at the Tumon View Phase 1.

“There was an explosion on the back of unit 210,” said property manager Vangie Cepeda. Cepeda works for Century 21 Realty Management. “I notified the fire department and the Guam Police Department so they’re here trying to ensure everything is safe.”

It’s not known what caused the incident, Cepeda said. The homeowner said he was doing schoolwork, she added.

“He heard a loud bang and then all of a sudden, fire,” Cepeda said. “He’s a bit shaken and he feels really bad for the other units. We’re just blessed and thankful that no lives were lost today.”

As of Wednesday afternoon, no injuries were reported, according to Cepeda. Residents were also evacuated, she said.

Cepeda applauded the response of GFD and GPD.

“When I called, they were activated almost immediately,” she said.

About six units were affected by the fire, according to Cepeda.

GFD spokesman and firefighter Kevin Reilly said the fire was contained to the unit and there was smoke and heat damage to the balcony of the unit above it.

Fire investigators were on scene working to determine the cause, Reilly said.

ABOUT US
Buzzshub is your news, entertainment, music fashion website. We provide you with the latest breaking news and videos straight from the entertainment industry.
Contact us: buzzsh[email protected]
FOLLOW US