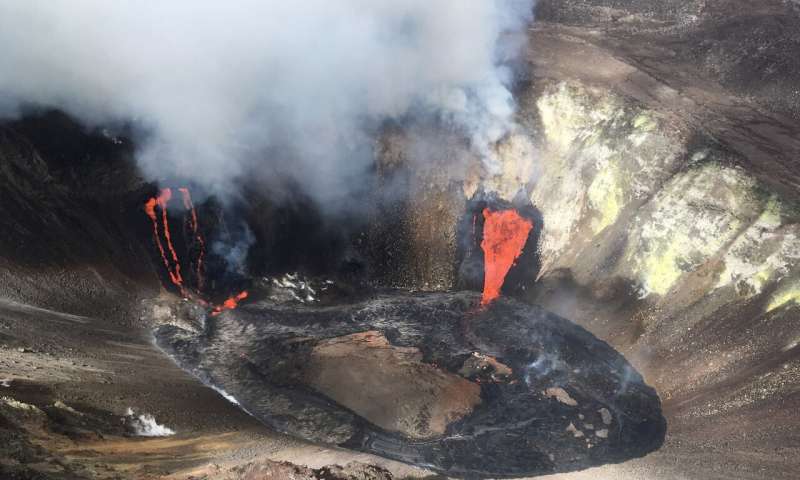 HONOLULU (NEXSTAR) — Lava was rising more than 3 feet per hour in the deep crater of a Hawaii volcano that began erupting over the weekend after a two-year break, scientists said Tuesday.

Kilauea volcano within Hawaii Volcanoes National Park on the Big Island was gushing molten rock from at least two vents inside its summit crater, the U.S. Geological Survey said. A lava lake has formed, rising about 440 feet from the bottom of the crater.

Since the eruption began Sunday night, Kilauea has spewed some 2 billion gallons of lava (10 million cubic meters), enough to cover 33 acres. The lava has been contained inside the deep crater.

It isn’t threatening to get close to people or cover property, like when Kilauea erupted from vents in the middle of a residential neighborhood in 2018 and destroyed more than 700 homes.

Hawaii Volcanoes National Park announced it will be temporarily closing its backcountry area for overnight use on Tuesday after the new eruption.

Park officials say rangers have been managing large volumes of traffic and parking overflow in addition to the thousands of people that gathered at the Kilauea Overlook throughout Monday, Dec. 21.

“Safety is our first priority, and the unexpected increase in visitors limits our capacity to manage and respond to incidents in remote backcountry areas of the park,” said Rhonda Loh, Hawaii Volcanoes National Park Superintendent.

When erupting, Kilauea tends to spew large volumes of sulfur dioxide, which forms volcanic smog, or vog, when it mixes with oxygen, sunlight and other gases in the air.

The Hawaii Department of Health advises residents in areas exposed to volcanic fog to reduce outdoor activity that causes heavy breathing and to stay indoors.

Kilauea is one of the world’s most active volcanoes, having erupted some 50 times in the last century. Between 1983 and 2018, it erupted almost continuously. It had a lava lake in its crater for the last decade of that eruption.