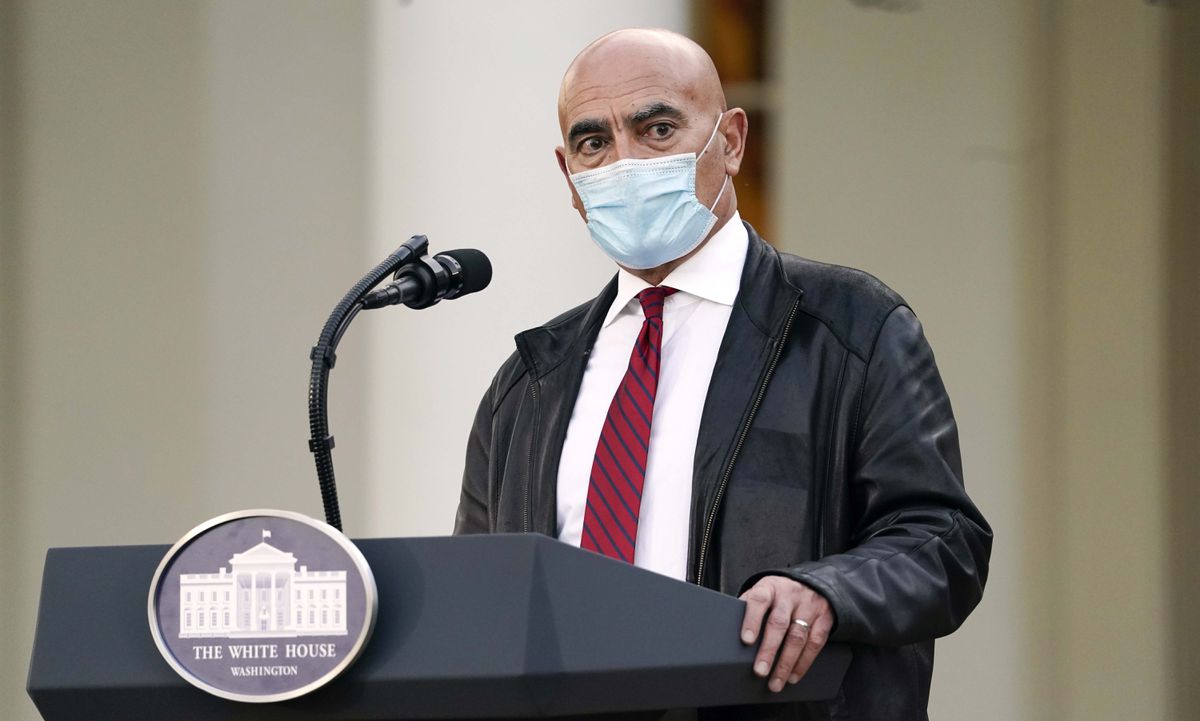 First it was England. Then Canada and Saudi Arabia approved use of Pfizer’s COVID-19 vaccine. Next up could be the United States, where regulators began their review Thursday and doses could be shipped within days.

Behind the effort is Operation Warp Speed, the $14 billion federal program launched in May to coordinate and accelerate development and distribution of millions of doses of multiple vaccines.

A foot soldier within that effort since the early days has been Army Major Doug Meyer, a native of Ellicott City who is talking publicly to generate support for the vaccines.

“I have full faith and confidence,” Meyer said, in the vaccines developed under the federal program, run by U.S. departments of Health and Human Services and Defense in partnership with private firms. “My parents and my family — my 12-year-old and 4-year-old daughters and my wife who is a labor and delivery nurse at Sibley hospital in Washington, D.C. — we are all going to take it when it’s our turn.”

Meyer, who is the chief operations officer for Operation Warp Speed, joins a list that includes ex-presidents, faith leaders and others encouraging the public to accept the vaccines that were created in months rather than the normal years. Surveys show doubts among many Americans.

The vaccine development process is considered a bright spot in the federal response to the coronavirus pandemic. Infections with COVID-19, the illness caused by the virus, are now surging and overwhelming hospitals across the country, which has already logged more than 15 million cases and almost 290,000 deaths, according to data from Johns Hopkins University. In Maryland, health officials report more than 222,000 infections and more than 4,800 deaths.

Two vaccine candidates have been through human trials and are before the U.S. Food and Drug Administration, which will consider authorizing them for emergency use. The Pfizer vaccine, developed with the German firm BioNTech, could be shipped in days, and another vaccine from Moderna could come a week later.

They are both mRNA vaccines, which use a bit of genetic material from the virus to instruct the body to produce antibodies that could fight the real virus. Such vaccines have been in development for years for other diseases but none have been approved. Data on the coronavirus vaccines presented to the FDA showed they were 95% effective, results most scientists were not expecting.

After the emergency authorizations, next comes the chore of distributing the early and scant doses that were manufactured at the same time as they were being tested.

After authorization, Meyer said, “we will have the vaccine moving out in the first 24 hours across America.”

He encouraged the skeptics about the vaccine “to speak to their doctor and look for credible information out there, from the CDC and government sources.”

Despite efforts to rely on science and stay “above politics,” as Meyer put it, federal health officials have face fierce headwinds from within their own government that could hamper efforts.

President Donald Trump has long dismissed and downplayed threats from the coronavirus and mocked protective mask wearing, a sentiment adopted by many of his followers and like-minded politicians. A report this week in the New York Times said the Trump administration passed on an Pfizer’s offer to sell it millions more doses. Pfizer did not accept money from Operation Warp Speed to develop its vaccine.

Some people have safety concerns because of the vaccines’ condensed development timeline. Surveys also show minority groups, distrustful of the health care system, are particularly skeptical of the vaccines.

A survey released this week by The Associated Press-NORC Center for Public Affairs Research shows about a quarter of Americans don’t plan to get the vaccine, including a third of women and 18% of men. Younger Americans are more likely to reject the vaccine than older people and minority groups more likely than white people. About 40% of Black people say they will pass on the vaccine, though they are twice as likely to die from COVID-19.

Read Also :   Live at 3: Sununu holds briefing to give updates about COVID-19 in NH

Experts say about 70% of the public will need to get a vaccine to establish herd immunity to the virus.

Ahead of Thursday’s meeting of the FDA advisory committee, Dr. Stephen Hahn, the FDA commissioner, sought to assure Americans that the process, though expedited, would be handled properly and openly by career scientists.

“The FDA recognizes that transparency and dialogue are critical to building public confidence in COVID-19 vaccines,” he said in a statement. “An open discussion with this committee … will help ensure clear public understanding of the scientific data and information that the FDA evaluates to make a decision about whether to authorize a vaccine for emergency use for the prevention of COVID-19.”

Vaccine hesitancy was a key topic Wednesday during a webinar hosted by the Johns Hopkins Center for Health Security for the Capitol Hill Steering Committee on Pandemic Preparedness & Health Security.

“We know we’re dealing with a number of communities with deep and well-deserved skepticism,” he said.

Dr. Ala Stanford, founder of the Black Doctors COVID-19 Consortium, said during the webinar that it will take a concerted effort to ensure people want the vaccine and make sure it’s distributed equitably. Some people, even health care workers, may need time.

“Access without empathy means nothing,” Stanford said. “There needs to be a true effort to listen to our health care workers, to listen to the community, and if they are hesitant to not penalize.”

Multiple campaigns are planned to encourage vaccination, including one in Maryland that will tap faith leaders and others. Gov. Larry Hogan will be among those planning a public vaccination to show confidence.

Most states, including Maryland, based their distribution plans on federal guidance that prioritizes front line health care workers, as well as nursing homes residents and staff and others at high risk.

Hogan said this week that he expects the state’s first shipments to include 155,000 doses, enough for only half the health care workforce. That includes 50,700 doses of the Pfizer vaccine and 104,300 doses of the Moderna vaccine.

Two doses are needed and a second set of vaccines are expected before the end of the month, Hogan said. Mass vaccination isn’t expected for months, but to prepare, the Maryland Department of Health issued an order allowing any licensed health care providers with proper training to administer vaccines, including doctors, nurses, pharmacists and paramedics.

Operation Warp Speed is working with states on where to send doses, Meyer said. Pfizer’s vaccine requires extremely cold storage temperatures and likely will go to large hospitals and other health facilities with special freezers. In all, Trump said this week, states had submitted 50,000 distribution sites.

Meyer said the federal program was working with private shippers on logistics. He won’t decide where any of the vaccines go or when.

He calls himself a “non-shooting point guard. My job is to take the ball down the court and find the expert to take the shot.”

Breaking News Alerts Newsletter
As it happens
Get updates on the coronavirus pandemic and other news as it happens with our free breaking news email alerts.
ENTER YOUR EMAIL ADDRESS

But Meyer, who now lives near Clarksburg, said he brings some skills to the job compiling information for decision makers that he picked up during 11 years on active duty, including a deployment to Afghanistan as part of Operation Enduring Freedom.

The Army also sent him to Georgetown University’s McCourt School of Public Policy for a master’s degree, and then he spent a year working in cybersecurity before being stationed with Operation Warp Speed as one of 16 original staff from the Defense Department that now numbers more than 100.

He’s hoping to convey the by-the-book work done there.

“It would be a shame if all this effort went into safe and effective vaccine development by scientists and in the end people didn’t take it or trust it,” Meyer said.

ABOUT US
Buzzshub is your news, entertainment, music fashion website. We provide you with the latest breaking news and videos straight from the entertainment industry.
Contact us: buzz[email protected]
FOLLOW US