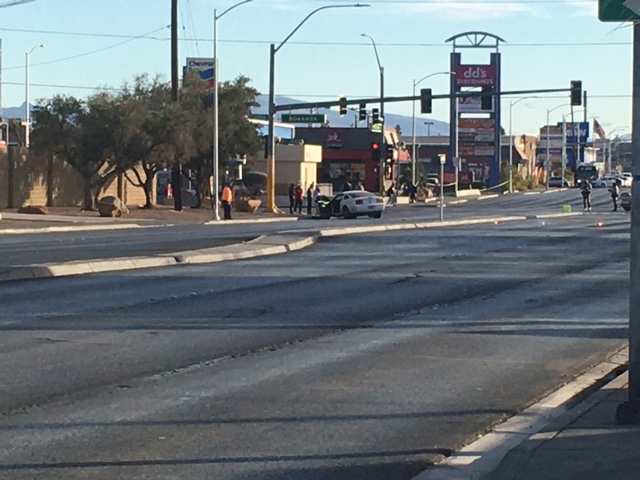 LAS VEGAS (KLAS) — A 26-year-old mother is dead after Metro Police say a vehicle driven by a 15-year-old male ran a red light at the intersection of Eastern and Bonanza Tuesday afternoon.

Police said a 16-year-old female passenger was also in the Mustang. Neither the driver nor the passenger were identified because they are both juveniles.

Ficklin says the Pathfinder was redirected in the collision and struck the mother, who was at the northeastern corner of the intersection. She was crossing with her children.

The family was transported to UMC Trauma, where the mother died.

The driver of the Pathfinder, identified Tuesday night as Leonor Rivera Rodriguez, 44, was transported to Sunrise Trauma with non-life threatening injuries.

The driver of the Mustang remained on scene, and Ficklin says impairment is not believed to be a factor at this time.

Several witnesses remained on scene, and their statements, along with video surveillance, will help with the investigation.

Ficklin says the top three causes of roadway fatalities are speeding, impairment and failing to yield the right away.

The lieutenant stressed that a lot of people tend to pride themselves on being multitaskers on the road:

Ficklin says this time of year usually sees an uptick in violent collisions and fatalities. He implores drivers, pedestrians and motorcycle riders to look out for other people, saying, “It’s better to arrive late than to never arrive at all.”

When Ficklin was asked what charges the Mustang driver will face, he said that will be determined after the investigation is complete.

The mother’s passing is the 97th fatality of 2020 in Metro’s jurisdiction.