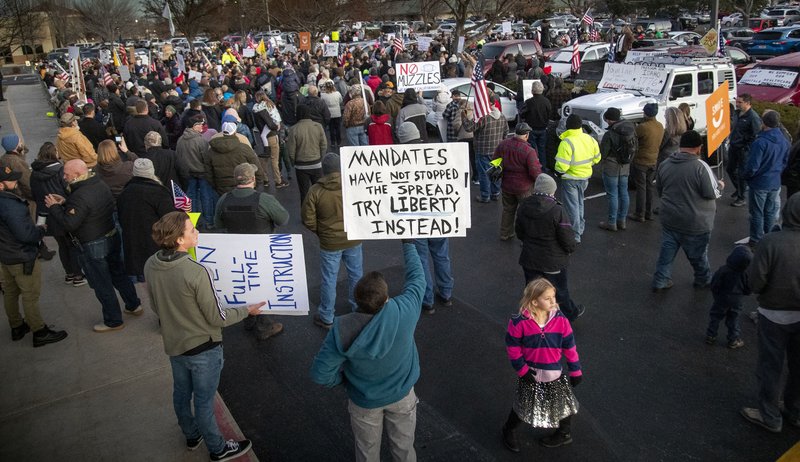 The request from Boise Mayor Lauren McLean and the Boise Police Department came just a few minutes after one health board member, Ada County Commissioner Diana Lachiondo, tearfully interrupted the online meeting to say she had to rush home to be with her child because protesters were banging outside her front door.

The board had been expected to vote on a four-county mask mandate in Idaho’s most populated region.

Coronavirus is so widespread in Idaho that hospital officials have repeatedly warned they are becoming overwhelmed and could be forced to implement “crisis standards of care” — where the patients most likely to survive are given access to life-saving treatment because there aren’t enough of the resources to go around — as soon as the end of the year.

The Idaho Department of Health and Welfare reports that at least 113,905 Idaho residents have been infected with coronavirus so far, including 2,012 new cases reported on Tuesday. So far at least 1,074 residents have died from COVID-19.

Those with history of ‘significant allergic reaction’ should avoid Pfizer vaccine, UK warns

Advertisement
People with a history of severe allergic reaction should not receive the new Pfizer-BioNTech vaccine against the coronavirus, Britain’s medical regulatory agency said Wednesday, after two health-care workers reacted adversely to the shot.

Virus_Outbreak_Britain_Vaccine_33878
A nurse prepares a shot of the Pfizer-BioNTech COVID-19 vaccine at Guy’s Hospital in London on Tuesday. Associated Press/Frank Augstein

Such a response can include skin reactions, low blood pressure, constricted airways and dizziness or fainting. Both workers have recovered, health officials said. But new guidance from the Medicines and Healthcare Products Agency now states that “any person with a history of significant allergic reaction to a vaccine, medicine or food … should not receive the Pfizer/BioNTech vaccine.”

Britain was the first nation to approve the vaccine and began immunizing elderly and long-term care patients, along with front-line health-care workers.

A California judge issued a sharp rebuke to Los Angeles County’s ban on outdoor dining Tuesday, Politico reported, saying the rule amounted to an abuse of emergency powers that “is not grounded in science, evidence, or logic.”

Practically speaking, the ruling will have no immediate effect on restaurants in Los Angeles. The county of 10 million people is under a temporary stay-at-home order from Gov. Gavin Newsom (D) that supersedes local restrictions.

But it nonetheless marks a major win for the state’s restaurant industry, which has been crippled by the pandemic and sweeping government responses. In issuing this latest moratorium, the judge said, Los Angeles public health officials had failed to provide evidence that outdoor dining increased the possibility of spreading the coronavirus.

“By failing to weigh the benefits of an outdoor dining restriction against its costs, the county acted arbitrarily and its decision lacks a rational relationship to a legitimate end,″ Superior Court Judge James Chalfant wrote in the 73-page order, according to the Associated Press.

Chalfant said the county’s outdoor dining ban can last only three weeks. Once it expires on Dec. 16, public health officials must conduct a risk-benefit analysis. Restaurants would be allowed to be open by then under his ruling, but Newsom’s stay-at-home order will last until at least Dec. 27.

Advertisement
The California Restaurant Association, which brought the lawsuit, said it was satisfied with the result, even if the outdoor dining ban was not overruled entirely.

“I do think that this is going to hold the county’s feet to the fire when they decide to close down an entire sector of economy,” the group’s lawyer, Richard Schwartz, told the AP. “You can’t have a cure that’s worse than the disease.”

The country’s national disease control center, the Robert Koch Institute, also reported 20,815 new cases of the virus on Wednesday, as the country inches closer to a national lockdown after Christmas.

Several German states, including Saxony and Bavaria, already moved closer to a “hard lockdown” Tuesday as officials warned that continued high coronavirus infections could overwhelm hospitals and that too many people were ignoring existing pandemic restrictions.

Advertisement
High-ranking government officials have also suggested a national hard lockdown for a two-week period after Christmas that would include extending school vacation by a week and closing all nonessential shops in the country.

Germany managed to avoid the high number of infections and grim death tolls seen in some other large European nations in the spring, and continues to have a lower overall fatality rate than countries such as Britain, France and Spain. But while restrictions imposed in November have slowed the exponential rise in cases, the numbers keep creeping up.

A Royal Caribbean International cruise from Singapore was forced to turn back early after a passenger tested positive for the coronavirus, the company said late Tuesday.

The operator started sailing three- and four-night cruises to nowhere on Quantum of the Seas after spending months developing health protocols with authorities in Singapore. The first such voyage was Dec. 1. It was Royal Caribbean’s first cruise with paying passengers since the pandemic forced a global shutdown in March.

The cruise that had to turn back left on Monday and was scheduled to last four days and three nights. Instead, passengers were still onboard with instructions to stay in their cabins early Wednesday.

Advertisement
Spokesman Jonathon Fishman said in an email that employees on the ship had “identified and isolated all guests and crew who had close contact with this guest, and each of those individuals have subsequently tested negative for the virus.”

DALLAS — Texas on Tuesday reported more than 15,000 newly confirmed daily cases of the coronavirus amid spikes in cases and hospitalization as winter approaches.

The Texas Department of State Health Services also said 9,028 people were hospitalized across the state. Last week marked the first time Texas surpassed a daily count of 9,000 hospitalizations since a deadly summer outbreak.

During the summer outbreak, the state saw the numbers of new daily cases go just past 10,000 for the first time. Since late November, the new daily cases have soared past 10,000 on several days, with 15,103 new cases reported Tuesday, according to state health officials.

Researchers at Johns Hopkins University say Texas has had more than 23,000 COVID-19 related deaths so far, the second highest in the U.S.

Over the last two weeks, the rolling average number of daily new cases has increased by 17%, according to Johns Hopkins. The university says that one in every 309 people in Texas tested positive in the past week.

Vermont_Daily_Life_55079
Jacob Rice, a worker from the Retreat Farm, helps with the Christmas tree in Pliny Park, in Brattleboro, Vt. in November. Kristopher Radder/The Brattleboro Reformer via Associated Press

MONTPELIER, Vt. — The Vermont Health Department is going to begin sending text messages to people who may have come into contact with someone who has COVID-19, an official said.

Health Commissioner Dr. Mark Levine said Tuesday the system is intended to ensure the word gets to people who may have been exposed to the virus as quickly as possible.

The person infected with the virus will provide the cellphone numbers of the people who may have been exposed.

Advertisement
“Our contact tracing team will help determine who gets these texts based on the exact situation,” Levine said during the state’s virus briefing.

The person will receive two short texts from the number 86911. The texts will be sent between 9 a.m. and 6 p.m.

“If you do get a text, please know it is a legitimate and important message from the department of health,” Levine said.

Alberta, the only province without a mask mandate, now has one as infection numbers are highest in Canada

EDMONTON, Alberta — Canada’s Alberta is restricting restaurants and bars to delivery or takeout and closing casinos and gyms in an effort to fight the highest rate of new coronavirus infection of any province in the country.

Kenney is also ordering the closure of recreation centers, libraries, theaters and personal service providers such as hair salons, barbers and nail bars. Infection numbers have also been over 1,000 since Nov. 24 and more than 1,600 a day for almost a week.