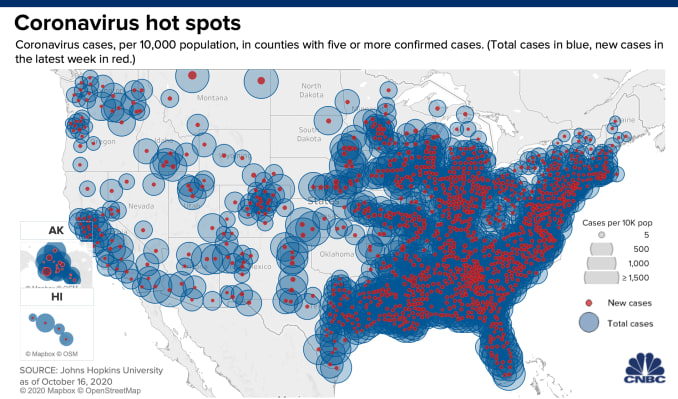 NEW YORK (NewsNation Now) — The U.S. is expected to begin its COVID-19 mass vaccination program within days. By the numbers, it can’t come soon enough.

With about 4.3% of the world’s population, the United States has seen over 20% of its reported coronavirus cases and over 18% of its deaths, according to Johns Hopkins University. 1,533 Americans died of COVID-19 on Monday.

Experts say we’re in the midst of the anticipated post-Thanksgiving rise in cases — and the blowback could be severe. New York may face another shutdown, with restaurants the first to feel it.

Nikki Haley says her sister-in-law died of COVID-19
That sentiment from the mayor of America’s largest city mirrors the reality across much of the country.

North Carolina is imposing an overnight curfew for restaurants, bars and retailers starting Friday, as COVID-19 numbers in the state hit new highs.

“I think it’s pretty clear that the later in the evening you go, the larger some of these gatherings can be,” said Gov. Roy Cooper.

The state of Texas is offering 15-minute rapid-tests to small business employees in several cities.

‘CA Notify’ is the latest initiative in California; an app that can let users know if they may have been exposed to the virus, while a somewhat controversial stay-at-home order remains in effect in San Diego County.

“We’re in the fight one more time to try and get this thing under control,” said county supervisor Nathan Fletcher.

In spite of the science, there are many incidents of rebellion. George’s Tavern in East Carondolet, Illinois is among the latest to be stripped of its food and liquor licenses for defying an order to shut down. Proprietor Juan Gillam feels he’s being unfairly targeted by the state.

“I’m tired of it,” he told NewsNation affiliate KTVI. “It’s been nothing but harassment.”

It’s a small-town version of the standoff that brought a massive protest to a tavern on Staten Island, New York, in a neighborhood where COVID-19 infections are spiking. The manager of Mac’s Public House was arrested last week. When he was found to be back in business Sunday, he was arrested again, but not before allegedly attempting to flee from police — a pursuit that left a sheriff’s deputy with two broken legs.

Florida COVID-19 researcher says home was raided for ‘speaking truth to power’
Through it all — the social disruptions, economic hardships and general frustration — come constant reminders from scientists and politicians to hang in there.

“The ultimate goal,” he said. “Which we’ve done with other infections, like smallpox, like polio, like measles, is to get such a large proportion of the population vaccinated that you essentially eliminate the particular pathogen from society.”

Dr. Fauci still doesn’t believe we’ll ever fully eradicate the coronavirus, but he said, a vaccine that’s 94% effective and developed in record time is about as good as we could ever have hoped for.