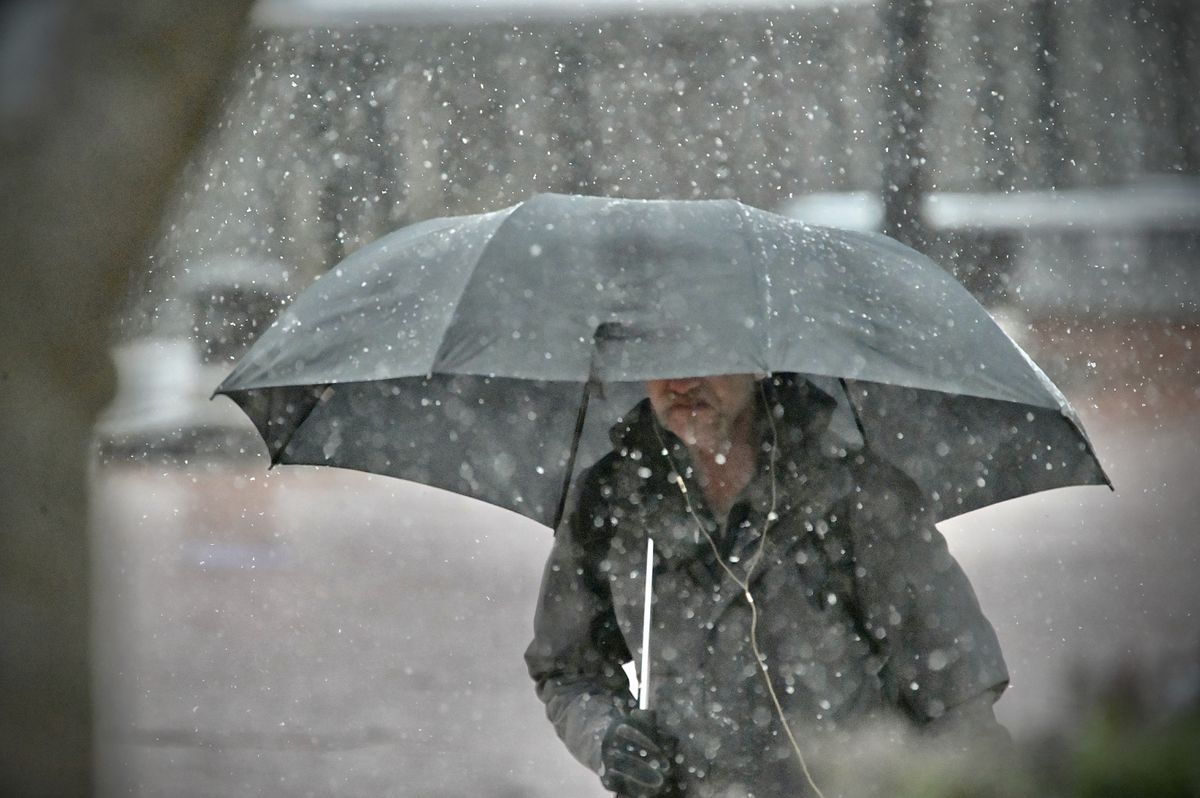 A winter storm brought as much as 7.5 inches of snow to parts of the Baltimore area as of Wednesday afternoon, causing messy road conditions with more snow and ice to come.

The Maryland State Police said they responded to 489 service calls Wednesday between 9 a.m. and 3 p.m., including 161 crashes and 60 unattended or disabled vehicles. The Baltimore Police Department has responded to 88 calls for accidents around the city Wednesday since noon, though sometimes there were multiple calls for a single accident, according to spokesman Donny Moses.

Harford County’s emergency service department said its 911 center has gotten many calls about traffic accidents because of road conditions.

By Wednesday evening, snow turned into sleet and freezing rain, which the National Weather Service said is likely to continue until early Thursday morning.

The Baltimore area is expected to see little to no ice accumulation.

The conditions in Baltimore have been “pretty OK” so far, Mayor Brandon Scott said, but he expects conditions to get worse. The biggest concern is potentially icy and slippery roads, Scott said, urging motorists not to drive if possible.

Read Also :   ‘Do as I say’: Anger as some politicians ignore virus rules

Nearly 300 vehicles have helped to put out 628 tons of salt citywide as of Wednesday evening, Scott said, and the city will be monitoring conditions going forward. He asked residents to be patient with crews dealing with the snow.

“We really want people to give the crews space to work by staying home,” Scott said.

Wednesday night the Maryland State Highway Administration said in tweets that all lanes of U.S. Route 29 North at Old Columbia Road in Howard County and Greenspring Avenue North and South at the Baltimore Beltway in Baltimore County were closed because of utility issues. In Frederick County, the agency said, two tractor-trailers jackknifed on Interstate 70 West, closing the right lane.

In the Baltimore City area, most of the snow, if not all of it, will probably melt with sunshine tomorrow, National Weather Service meteorologist Cody Ledbetter said.

“The big hazard comes in tonight when we get down into the mid-20s in the city, so any snow or wet spots will all freeze back overnight tonight, so that will be trouble for the morning commute tomorrow most likely, with some icy spots on the roads,” Ledbetter said.

The forecast for Baltimore calls for wind gusts up to 28 mph Wednesday night and a low near 29 degrees. Freezing rain and sleet will become all snow after 1 a.m.Less than a half an inch of new snow is possible.

Most of the region is under a winter weather advisory until Thursday at 1 a.m., while a winter storm warning is in effect in parts of Baltimore, Harford and Carroll counties until 4 a.m.

Read Also :   JingleFest to be held Saturday in Skowhegan

Snow day
Snow day
Sledders enjoy the snow on the hill by the Patterson Park pagoda Wednesday afternoon as a Nor’Easter moves through. (Jerry Jackson/Baltimore Sun)

1 / 41
North and west of the region, Frederick County has seen up to almost 6 inches of snow as of Wednesday afternoon, according to the National Weather Service, and Garrett County has seen more than 8 inches in some parts.

“I encourage residents to stay indoors, especially those most vulnerable to cold,” said Dr. Letitia Dzirasa, the city’s health commissioner, in a news release. “Extreme cold temperatures can permanently injure, or even kill. Please be sure to check on neighbors who you think may be at risk to ensure that they have heat and power, and take care to shelter pets appropriately.”

The declaration, which will be in effect through Thursday morning, occurs when wind chill is expected to be 13 degrees or below or “conditions are severe enough to present a substantial threat to the life or health of vulnerable Baltimore citizens,” according to the release. Such a declaration was issued for five days last winter, the release said. Ten people died in the city for cold-related reasons last winter, the release said.

Gov. Larry Hogan, a Republican, urged Marylanders to stay tuned to local news for updated forecasts, heed the guidance of local and state authorities, “and most importantly, use common sense.”

State Highway Administration crews are treating roads, and officials are asking drivers to put off unnecessary travel and clear snow off their vehicles to prevent large sheets of snow and ice from flying off while driving. The wintry mix will likely make driving “hazardous,” according to a tweet from the Baltimore County Fire Department.

Seventy percent of snow and ice-tied injuries happen in cars, according to a tweet from the Maryland State Police.

The National Highway Traffic Safety Administration also reminded drivers to pass snow plows with caution, while the Maryland State Highway Administration said to slow down in the winter weather Wednesday.