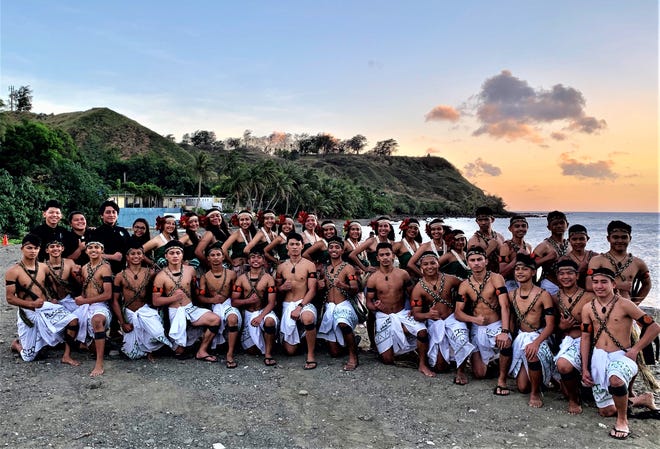 Inetnon Gefpå’go has spent 20 years promoting Guam’s arts and culture and is making sure the program continues to educate, perpetuate and promote it through the performing arts.

As part of its 20th anniversary commemoration, the award-winning group and Independent Guåhan had a special virtual reunion and YouTube premiere of the 2010 theatrical production, “Guåhan: Fanhasso, Fanhita, Fanacho.

Inetnon Gefpå’go also began production of its new eight part “Minagof Minute” series in partnership with Humanities Guåhan. The first episode is streaming on instagram’s IGTV platform,m according to a news release.

Under the direction of Vince Reyes, master of CHamoru dance and national folkdance director for Guam, Inetnon Gefpå’go has adapted its outreach to perpetuate fellowship through the arts during the ongoing pandemic.

“We are so grateful to share the CHamoru culture for the last 20 years in 27 countries, while instilling pride in our young people and building an international network that spreads goodwill about our island home,” said Reyes. “Our goal this year was to provide a space for everyone to breathe, pray and meditate so it can bring them some relief and enjoy during this pandemic.”

Pandemic problems
The group started its 20th year performing at the Royal Opera House in Muscat, Oman, as well as regular performances in Guam at the Sheraton Laguna Guam Resort and the former Outrigger Guam Beach Resort. The history of Inetnon Gefpå’go was also presented early in the year as part of the Guam Museum’s HITA Talk Series, the release stated.

Just weeks before Guam’s first case of COVID-19, selected members of the Inetnon Gefpå’go Southern High School chapter were slated to accompany Guam’s superintendent of education to feature the island at the Council of Chief State School Officers in Washington, D.C. Performances at the National Endowment of the Arts as well as student exchanges in New York City were to follow.

Current members and alumni gather together during a presentation at the Guam Museum in this file photo.
“We had several tours and plans lined up, but just like everything else this year, it came to an abrupt halt. But that didn’t stop us,” said Reyes.

Culture in demand
The group’s presence locally and internationally also grew in demand. Inetnon Gefpå’go performed at Independent Guåhan’s Na’lå’la’ concert series, as well as virtual dance festivals all over the world.

It represented Guam in the prestigious Büyükçekmece Cultural Arts Festival in Turkey, where it placed third in 2015. The group also performed virtually at the Festival Internacional de Folclore de Passo Fundo in Brazil, as well as Bayanihan’s Fiesta Folkloriada Festival in the Philippines and Festival International Virtual Camagua in Cuba.

With the help of the Guam Council of Arts and Humanities Agency, Inetnon Gefpå’go was featured as part of the John F. Kennedy Center for Performing Arts “Arts Across America,” the release stated.

A performance at the Sheraton Laguna Guam is shown in this file photo. Inetnon Gefpa’go was performing five nights a week prior to the pandemic
In partnership with Humanities Guåhan and the National Endowment of Humanities CARES Act grant, Inetnon Gefpå’go also organized a groundbreaking three-part webinar series on CHamoru Dance..

Inetnon Gefpå’go is in the planning stages of developing different focus groups with dancers and the community that will launch in 2021.

“We may not be able to perform physically in front of an audience but we are still committed to cultural education through our performances. Now more than ever the arts are needed,” stated Reyes.

Dubai Calling: Time to Explore The 10 Most Promising Online Business...