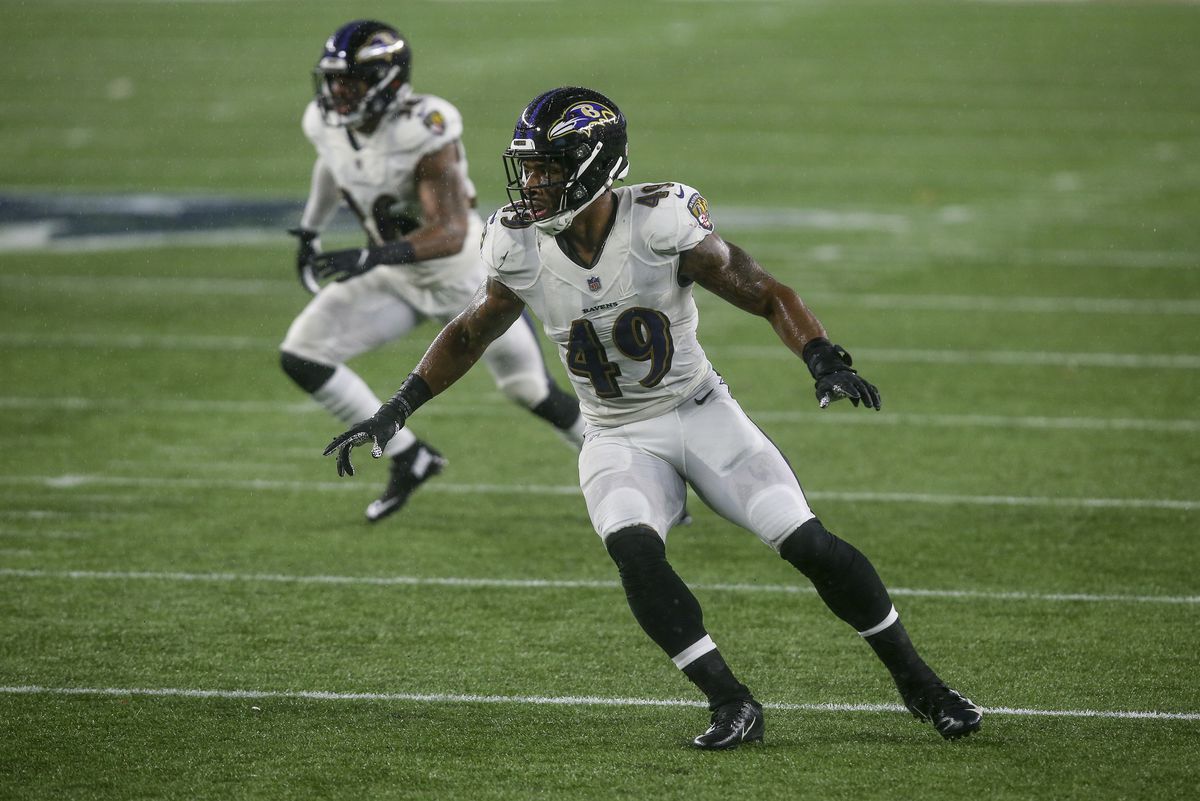 Every NFL season, even the most stable and successful one, makes a mockery of our preseason attempts to project 53-man rosters.

Injuries are so intrinsic to professional football that general managers know they will have to play Dr. Frankenstein, mining the waiver wire and the depths of their own rosters for fresh parts.

Would the Ravens have finished last season 14-2 with a top-five defense if general manager Eric DeCosta had not picked up linebackers L.J. Fort and Josh Bynes on the fly?

That said, 2020 has proved particularly challenging for DeCosta and coach John Harbaugh, who’ve been forced to cover for season-ending injuries to vital players such as left tackle Ronnie Stanley, tight end Nick Boyle and nickel cornerback Tavon Young, not to mention a COVID-19 outbreak that left the team without nine starters for its Week 12 loss to the Pittsburgh Steelers.

In the wake of all this attrition, the Ravens’ push for another playoff berth depends on players who were seemingly inessential to the team’s plans as of the Sept. 13 season opener.

“In the NFL, there’s one thing that’s for certain: Injuries are going to happen,” Pro Bowl cornerback Marlon Humphrey said. “I think management has done really good with having the right guys in place to be able to plug and play here.”

How it’s going: The Ravens did not cut Powers, but he played just 37 snaps in the first eight games of the season. Phillips earned the first shot to fill Marshal Yanda’s old spot at right guard, and veteran D.J. Fluker also stood ahead of Powers on the depth chart. But Stanley’s season-ending ankle fracture, coupled with a less severe ankle injury that landed Phillips on injured reserve, led the Ravens to reassess their entire offensive line. Powers played 34 snaps in Week 10 against the New England Patriots and started at right guard for the first time in Week 11 against the Tennessee Titans. “He’s a fighter, he moved his feet well, he’s a good athlete, he had a lot of good blocks, and [he’s] a tenacious guy,” Harbaugh said after that performance. “He was going against two good [defensive] tackles. Those guys are very physical players, and I thought he held his own quite well.” Powers has given Harbaugh no reason to pull him from the lineup, even with Phillips back on the game-day roster. The Ravens have run effectively behind their reconfigured right side, with Fluker handling most of the snaps beside Powers over the past two games. They rank third in ESPN’s run-block win rate statistic. Powers has gone from preseason bubble candidate to essential cog. “The more playing time, the more comfortable I become,” he said.

[More from sports] Ravens postseason rooting guide for Week 16: How the Steelers could help in wild-card chase »
How it’s going: Bowser has become one of the team’s most important defenders over the past month. When Judon went on the reserve/COVID-19 list, Bowser absorbed most of his snaps. Even with Judon back to peak form in last Sunday’s victory over the Jacksonville Jaguars, Bowser played more snaps. He has two sacks and ranks third on the Ravens with 12 quarterback hits. More importantly, he’s the best coverage linebacker on the team, which is extremely unusual for a player who lines up outside. His interception to set up a short touchdown in the Ravens’ 47-42 win over the Cleveland Browns would make a shortlist of most essential defensive plays of the 2020 season. “You all have to respect this man in coverage,” Judon said after that game. “Respect him — he can rush, and he can cover. He does both, and he’s an extremely hard worker.” Bowser’s performance has led to speculation about how much the Ravens might pay to keep him in the offseason. They rely so heavily on his and Judon’s versatility that it’s hard to envision them going forward without one or the other.

Read Also :   Frontline essential workers should be next in line for US COVID-19 vaccines, CDC advisers say

How it’s going: Tomlinson played a season-high 23 offensive snaps against the Jaguars, and the Ravens signed him to their active roster two days later. They released Willson, so for now, Tomlinson is the closest they have to a Boyle stand-in. With one target and no catches in four games, he’s not a factor in the passing game, which fits with his previous history. But he’s used his 6-foot-6, 263-pound frame to good effect as a run blocker. “He’s done a really good job,” Harbaugh said. “He’s come in and learned the offense. [He’s a] very smart guy, very determined, really good blocker, so he fits what we’re trying to do. He can kind of fill the void there a little bit that Nick left.” The Ravens used one of their four practice-squad protections this week on rookie tight end Eli Wolf, who’s more of a receiving threat than Tomlinson. So perhaps we could yet see them return to using three tight ends.

How it’s going: Board remained a deep reserve on defense to start the season, playing just 45 snaps at linebacker through the first seven games. But he’s played 183 in the seven games since and he played more against the Jaguars than Fort and rookie Malik Harrison combined. “He just plays the position better,” Harbaugh said. “He’s learned it. He wasn’t really an inside ‘backer in college; he was more of kind of a strong safety, slot-type of a player. That’s what we saw him do, but we projected him as an inside ‘backer. So, there’s been some training that’s been done. I think [linebackers coach] Mike Macdonald has done a great job with him.” The Ravens favor Board’s speed in games that require their inside linebackers to cover more frequently. He was a Pro Bowl candidate on special teams, but his play in that phase no longer defines his role with the Ravens.

How it’s going: Injuries to Young, Smith and most recently Peters have wiped out the Ravens’ cushion at cornerback. Averett was part of that story as he went on injured reserve after fracturing his shoulder against the Philadelphia Eagles in Week 6. But with his peers ailing, he’s returned to a prominent role that includes playing 55 snaps in Week 13 against the Dallas Cowboys and 58 against the Jaguars in Week 15. Averett’s playing time could again recede if Peters comes back Sunday against the Giants, but the Ravens are at least comfortable lining him up outside against a top wide receiver. “I consider him a starter-quality corner, for sure,” Harbaugh said. “He gets better all the time. I think it’s really important to him to prove himself this year. He wants to make a name for himself and prove that he’s one of those kinds of guys.”