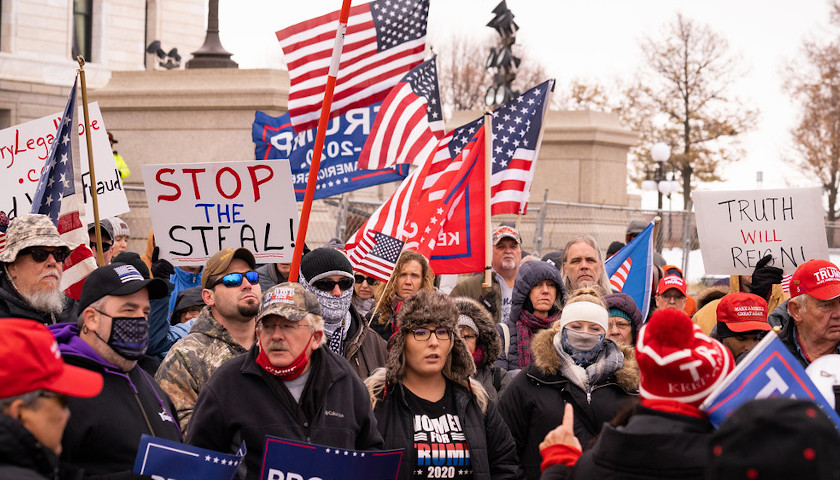 Flagrant election cheating in several swing states, it seems, is of no interest to the self-appointed watchdogs of American democracy or even to those specifically tasked with investigating such unlawfulness.

The U.S. Department of Justice, despite its preachy corporate motto, is thus far blind to it. Journalists and professional pundits on both sides of the aisle downplay talk of what has happened as “baseless conspiracy theories” pushed by cult-like Trump loyalists. Most Senate Republicans are eager to move on while ignoring provable instances of voting fraud in their own states and urging the president to concede “for the good of the country.”

Even with a potentially power-shifting Senate election on January 5, no one seems particularly motivated to quickly remedy how absentee ballots have been mishandled, manipulated, and doctored in the 2020 presidential election.

And the entity usually considered the final and most impartial arbiter of injustice in the country—the court system—now, too, is in on the election fix.

Using COVID-19 panic as the pretext, election officials across the country turned a once-venerated quadrennial tradition into a rogue farce. Nearly 66 million mail-in votes were cast in the 2020 presidential election, double the number from 2016; the overwhelming majority were for Joe Biden.

Numerous lawsuits have detailed how state election laws, particularly those related to mail-in ballots, were broken. One would think that given Biden’s slim margin of victory in three states—only about 250,000 votes separate Biden from President Trump in Wisconsin, Michigan, and Pennsylvania—judges sworn to uphold the rule of law might exhibit at least a passing interest in exhausting all the evidence.

After all, if Americans can’t depend on the Justice Department or their state attorneys general, Democrats in those three states, or even local Republican leaders to come to the rescue, surely the black-robed referees perched on the bench will step up, right?

Wrong. Not only are the courts dismissing lawsuits, judges are setting dangerous precedents that will have more election-eroding consequences later.

Let’s start with the U.S. Supreme Court. In a terse, unsatisfying two-sentence statement on Friday, the court refused to consider the lawsuit filed December 7 by Texas Attorney General Ken Paxton, subsequently joined by his colleagues in 19 states as well as 126 Republican congressmen and the Trump campaign.

“The State of Texas’s motion for leave to file a bill of complaint is denied for lack of standing under Article III of the Constitution,” the court order read. “Texas has not demonstrated a judicially cognizable interest in the manner in which another State conducts its elections.”

Justices Samuel Alito and Clarence Thomas disagreed, commenting the court “do[es] not have discretion to deny the filing of a bill of complaint in a case that falls within our original jurisdiction.”

Constitutional experts lauded the ruling as appropriate and described the Texas lawsuit as “dangerous” and “reckless.” Voters in Texas and other aggrieved states, the legal eagles warned, have no “standing” to challenge how other states administer their elections under the Elector’s Clause established in Article II of the Constitution.

But the notion that one state does not have an “interest” in how another state elects the president of the United States is absurd. Let’s take it a step further: What if Pennsylvania in the future allows noncitizens to vote legally in presidential elections? What if Michigan decides to give people of color two votes to compensate for past election “disenfranchisement?” What if Wisconsin allows people under the age of 18 to vote for president?

Those laws, which seem far-fetched but become closer to reality each election, clearly favor Democrats and would pose an insurmountable hurdle for Republican candidates in swing states. The rest of the country would be held hostage to the power-hungry whims of Democratic politicians and bureaucrats in decisive states. Americans are entitled to a better explanation from the court about how arbitrary election rules don’t in fact violate the 14th Amendment, as the Texas petitioners also charged.

(In another sign justices are reluctant to rile Democratic interest groups, the Supreme Court on Monday refused to review a lower-court decision that ruled Kansas’ voter registration requirement for proof of citizenship, such as a passport or birth certificate, violates federal law. Ironically the plaintiffs, including the American Civil Liberties Union, claimed the Kansas law violated the Equal Protection Clause of the 14th Amendment, an argument the court just upheld.)

Administering fair elections with similar laws that honor the Constitution is part of the compact between states; once that deal is off, only the Supreme Court can calibrate the balance. The court in October also declined, without explanation, to reverse a lower court ruling that let Pennsylvania count mail-in ballots received three days after Election Day, including ballots in envelopes without postmarks.

Further, the Texas lawsuit didn’t challenge the right of states to write their own election laws. The petitioners argued, correctly, that government officials, both elected and unelected, broke the laws. As I summarized here, rules approved by state lawmakers, per the Constitution, were ignored or changed without permission. Elections workers in two states pre-canvased and “cured” ballots weeks before they were legally allowed. Michigan’s Secretary of State, without legal authority, sent 7.7 million mail-in ballot applications to registered voters.

Cowering Before the Mob

Election workers in Wisconsin actually filled in missing addresses on certification envelopes. Without approval by Wisconsin’s legislature, appointed members of the Wisconsin Election Commission on October 19 instructed local election clerks to “resolve any missing witness address information prior to Election Day if possible, and this can be done through reliable information (personal knowledge, voter registration information, through a phone call with the voter or witness.)”

“While a witness address must be provided on the certification for the corresponding ballot to be counted, the statute is silent as to what portion of an address the witness must provide.” Never mind that every person with a functioning brain understands an address to involve a street number, city, state, and ZIP code; since the Wisconsin legislature didn’t spell out what is generally accepted as common knowledge, election workers could enter the information themselves without anyone present to verify it was correct and without the voter’s knowledge.

Not to be outdone, the highly partisan Pennsylvania Supreme Court quibbled about the term “observers.” Once again using COVID-19 as the excuse, the court accepted “social distancing” barriers set up in the Philadelphia Convention Center that confined poll watchers to at least 15 feet away from canvassing tables and behind a “waist-high security fence.” Trump campaign officials could not verify that the more than 370,000 mail-in ballots processed at the huge facility met all state requirements. (According to one election data portal, only 232 mail-in ballots were rejected in Philadelphia County in the 2020 general election.)

Even though Republican observers couldn’t see the information on the envelopes, the fact that they could see the entire canvassing operation, albeit from a distance, satisfied the 5-2 majority Democratic Pennsylvania Supreme Court. “Given that observers are directed only to observe and not to audit ballots, we conclude, based on the witness’s testimony, that the Board of Elections has complied with the observation requirements,” the court ruled November 17.

So, while most Republican leaders cower to the mob, the Justice Department remains (in President Trump’s words) “missing in action,” and Georgia election officials prepare to administer the same faithless election next month as they did last month, federal judges toy with words and pass the buck.

And that, not a few lawsuits, is both reckless and dangerous to democracy.

Julie Kelly is a political commentator and senior contributor to American Greatness. She is the author of Disloyal Opposition: How the NeverTrump Right Tried―And Failed―To Take Down the President Her past work can be found at The Federalist and National Review. She also has been featured in the Wall Street Journal, The Hill, Chicago Tribune, Forbes, and Genetic Literacy Project. After college graduation, she served as a policy and communications consultant for several Republican candidates and elected officials in suburban Chicago. She also volunteered for her local GOP organization. After staying home for more than 10 years to raise her two daughters, Julie began teaching cooking classes out of her home. She then started writing about food policy, agriculture, and biotechnology, as well as climate change and other scientific issues. She graduated from Eastern Illinois University in 1990 with a degree in communications and minor degrees in political science and journalism. Julie lives in suburban Chicago with her husband, two daughters, and (unfortunately) three dogs.
Photo “Stop the Steal” by Chad Davis. CC BY-SA 2.0.